On Sunday morning, I cleaned the kitchen. I wiped down every surface and put everything in its place and threw a bunch of stuff away and took old cookbooks downstairs, and suddenly our kitchen looked (and smelled) really good.

Meanwhile, Jeff and the girls bagged up shoes that no longer fit and clothing that no longer works and stuffed animals that always seem to take up too much space, and suddenly we were able to see parts of the floor that we haven’t seen in years.

When we moved into our house (exactly eleven years ago), we promised ourselves that we would stay for five years. Two years later, Harper moved in. And then five years passed and Meredith was in kindergarten and Harp was in preschool and let’s watch TV instead of packing stuff up. Six MORE years have passed, and we’re cramped. Our house isn’t a bad house, but the girls would love to have their own rooms and I would love to have a table in the kitchen and although we really like a few of our neighbors, we wouldn’t miss the others.

We’ve spent the past year lazily looking at open houses, and none of them sparked us. Ah, but then Sunday came around and we drove to a house on a street that has Winter in the name. (You know that winter is my favorite, right?) We pulled up to the house and I said, “Oh, wow. This is our house.”

When we walked in, the realtor introduced herself to us, and asked us to either take off our shoes or put on the booties. I was so excited that I took off my shoes AND put on booties and then I tripped on the bootie elastic and lost my balance and tried to look cooler than I am but failed, so I started laughing like an awkward lady because that’s EXACTLY WHAT I AM.

When we first walked into our current house (about eleven years and a month ago), we said, “This will do.”

When we walked into the winter house, we fell in love. (Honestly, the only thing missing is a fenced-in back yard.) It’s weird, because it’s in our price range, has FOUR bedrooms plus a finished basement and room for a table in the kitchen along with a bar where I can have meaningful talks with the girls as I cook amazing dinners and they snack on fresh veggie sticks. It has an office for Jeff. It has space where I can sit at my spinning wheel and look out the window. It has something called a Florida room where Jeff and I can read the paper and talk about smart people things like science and indie films.

This is an actual photograph taken after I hugged the tree in the yard and said something like, “That bathtub in the master bathroom is where I want to take a bath. Tonight.” 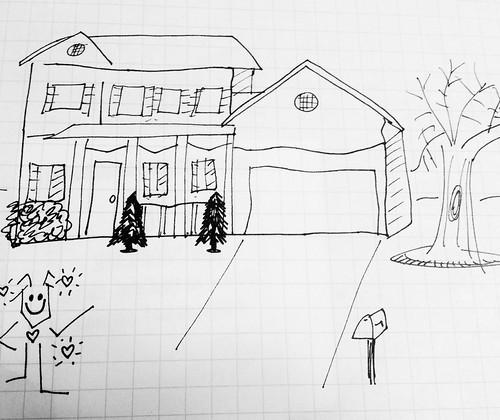 I spent the rest of the evening on Sunday eating dump cake and burrito bowls and singing love songs to the house.

Yesterday afternoon I met a friend for lunch. Because I’m sort of unpredictable and not the best at managing time, I ended up being an hour early. (The restaurant is less than a half hour away from my house. I have no idea why I do the things I do.) Anyway, as I sat in my car and listened to the radio, I felt my phone buzzing in my pocket. It was the winter house realtor. She could tell that I loved the house and she wants to come over to OUR house and I’m not even going to worry about punctuation right now because the whole conversation went just this quickly and the house we live in needs to be ready for her to see in less than two weeks and we’re meeting with a lender soon and I’ve made arrangements to get boxes and this weekend we’re going to rent a storage facility and yesterday I told our principal that I won’t be signing up for committees next year because: We’re moving.

Let me be clear: The house we fell in love with (also known as the house with which we fell in love) will sell very quickly, and most likely not to us. BUT, we’re finally taking the steps. And there WILL be other houses that are hopefully just as perfect for us.

I’m taking pictures off of the walls and boxing up everything that we don’t use on a daily basis and we’re hoping to be in a new place before the next school year starts. This is no longer just a thing we talk about before we change the channel over to The Amazing Race. This has become a verb. Stay tuned. ‘ ‘ ‘text/javascript’>