I’ve been cleaning out our dining room closet because the dining room is being sold as a bedroom and no one keeps weird tablecloths and expired cleaning products in their bedroom closet. (I guess I can’t really speak for No One. All I can say is that the imaginary toddler who will be residing in our dining room (on a princess bed!) will not have tablecloths and chemicals in her closet. (I’ve named the imaginary toddler Winnie.))

Yesterday I found the Christmas cards we received in 2004. It was VERY difficult to decide which ones to recycle. In the end, I kept only the cards from friends and family members who are no longer with us, as well as a card from Stew because I have a funny feeling it may be worth a million dollars some day. We won’t sell it for a million, but it will be nice knowing that we have a Christmas card that can pay the girls’ way through college and beyond.

This is Stew. (This song could have been written about me if my life in the early 90s was slightly exaggerated and deemed worthy of a song.)

(I also found a size 2 thong with tags still attached. It was in a ceramic box that said, “Been looking for love, and then came you.”) 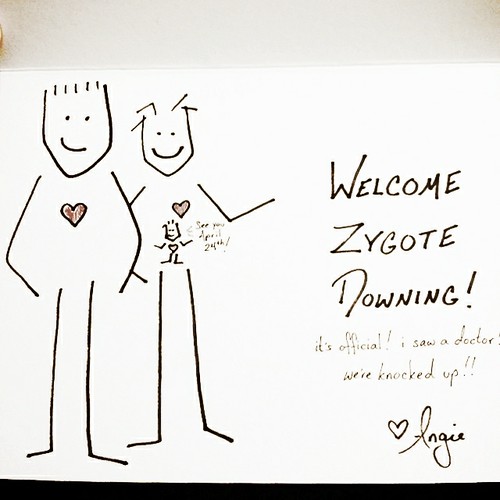 I quickly posted it onto Facebook, and a few people didn’t notice that it was from 2002, and I received a congratulatory e-mail, and it felt really weird, considering I had a hysterectomy six weeks ago. At the same time, I’ll never again be congratulated for growing an actual baby, so one last spin wasn’t necessarily a bad thing.

The inside of our house has been painted and we have new carpeting in the basement. We’ve been filling the driveway with stuff we no longer want and we’ve watched people pull up and dig through our old stuff, sometimes filling their cars with things like tiny plastic chairs and yard polo sets. (Last night a man pulled up and took Jeff’s old home brew kit along with some unused beer bottles. Jeff talked to him about where to find supplies, and BAM! There’s a new beer brewer in town, and his name is John.) ((Have I mentioned that I haven’t had a drink since February 6th? (I probably have six lady drinks per year. Now that I’ve made the personal connection between alcohol and migraines, my red-faced days are over.)))

Anyway. I’m overwhelmed. We have so much stuff and nowhere to put it. I spend the days moving things from place to place and Sisyphus comes to mind.

I just wanted to check in. I hope your weekend is a good one. ‘ ‘ ‘text/javascript’>