The girls started school and are liking it as much as you can like being a new kid in a big place where everyone else seems to know one another. They’re doing fine and they’ll do fine.

I went to Chicago for a day with Tempe and my mom for our annual yarn/fiber celebration. While there, we ate salads and cheesecake and we knit in front of a fireplace. I believe it was just what we needed. 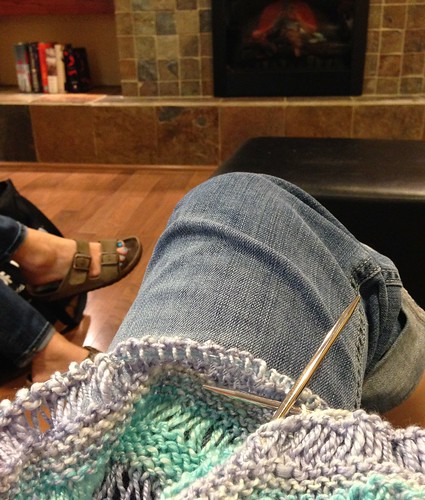 I came home with yarn to make three shawls and fiber to create something that may eventually become a pair of socks. (It all depends on if I can spin it thin enough to score the proper yardage. I’m not as good as I wish I was.) 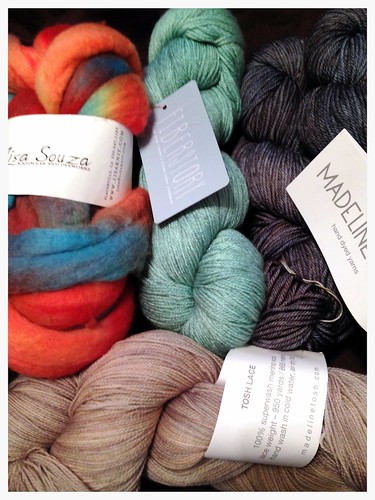 I also purchased a Lo-Lo Bar, and I encourage you to do the same.

We closed on the new house two days ago and scheduled our movers to be here yesterday morning. They arrived on time, estimated our job to be a four hour move, loaded the piano and two boxes into the truck, and then told us that two of the three movers had plans before 3:00 and that the rain was going to slow them down and may result in stained carpeting in both houses. They then unpacked the piano and two boxes and left. They’ll be back tomorrow. Hopefully. It felt like a big deal, but it’s really not a big deal. We’re still surfing.

As I drove home from the house last night, our car (known to us as Carlos) hit the 100,000 mile mark. I would show you the photo, but then you might yell at me for taking a photo while I was driving. (Please know that I set the camera up before starting the car and that I was in complete control. I don’t text while driving! Also, I turn on my headlights whenever it looks like rain.) Anyway, our beloved Rocket hit the 100,000 during the piano solo in Overblow Your Nest.

Anyway, knowing that I wanted Carlos to follow in the steps of Rocket (because I’m just a little bit weird like that), I hit the play button at 99,998. Before the piano solo ended, we saw 100,000. (Can you tell I don’t really have much to talk about? Look how many words I’ve wasted on Carlos and his mileage! Shakespeare’s plays contain only 884,421 total words. I really should be more careful.)

((We once lived upstairs from a guy who described the woman he loved by saying “None of her movements are wasted.” I will never forget that, mainly because I tend to not move very often (If you are my Fitbit friend, you KNOW this.), and when I do? Movements are definitely wasted.))

I won’t have an internet connection at the house for five days. I promise to use that time wisely. ‘ ‘ ‘text/javascript’>

6 thoughts on “Yards and Miles”