It’s National Sandwich Day, and if I could eat any sandwich right now I would eat a warm bagel with apple slices, melted Muenster cheese, and a touch of Champagne mustard.

The girls didn’t have school today because schools are sometimes polling places, and: Better Safe Than Sorry when combining townies with students. We took advantage of the free time by visiting the orthodontist in the morning and then spending the afternoon crafting with several of Meredith’s friends. At 4:00, I was poked in the arm with a drippy B12 syringe and then we came home and tried to figure out what happened to the dead bird that we had left behind at 10:45 this morning when we were running a bit late to the craft party. Perhaps the bird wasn’t so dead after all.

Before the orthodontist appointment, I dropped by the library to return some things and to pick up a few Lynda Barry books so I have something to look at until the new John Irving arrives on Thursday. (I wasn’t going to order the John Irving, but then I read a review that said the latest book is the closest thing to A Prayer for Owen Meany since A Prayer for Owen Meany. I ordered it at 3:47 in the morning, which I believe was two minutes after I stopped trying to help the Bubble Witch save her pets. The book shipped this afternoon, and the pets have still not been saved.)

Lynda Barry is flawed yet perfect and she speaks to so many parts of me. 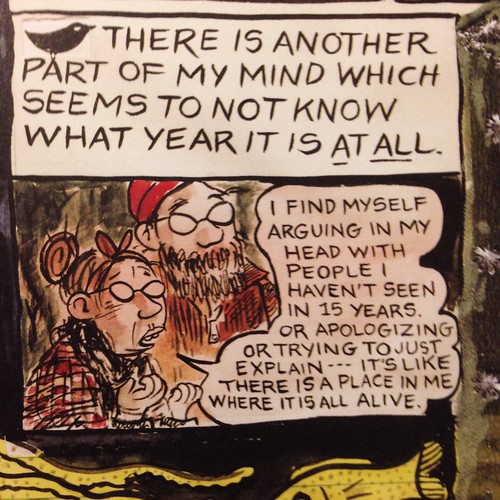 I still spend time in the shower thinking about the things I should have said when my junior high librarian yelled at me for throwing paper out the window. I also regret some of the things I said to a classroom of seventh graders when I was in the ninth grade. I want a redo on a few conversations I had in college. So much anxiety about an unchangeable past.

5 thoughts on “I have a satsuma rice bag in my freezer.”