School was canceled early this morning because the northern portion of our district had snowy roads. Our roads were completely clear by 9:00, which meant this guy and I were able to keep our 10:50 vet appointment. 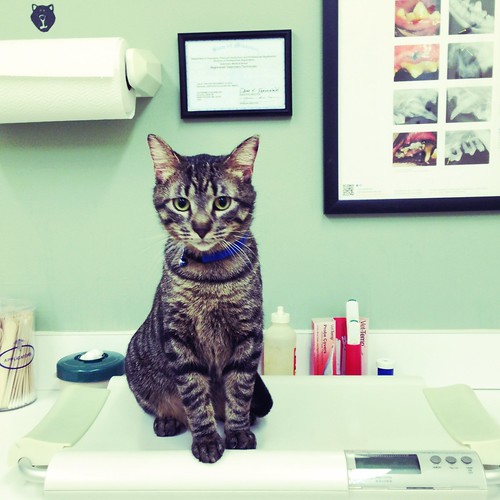 When we arrived, Graham popped out of his crate and immediately began rubbing himself all over everyone in the room which caused the vet tech to drop everything in order to organize a Graham Cracker Fan Club. (Graham is definitely a charmer.)

Final diagnosis? Colitis and what may or may not be (but probably is) ringworm. And that means the weird rash on my neck is also ringworm. And it’s almost like I’m trying to turn you away by telling you a foot story one day and a ringworm story the next. God only knows what I’ll show you tomorrow.

Graham is no longer allowed to eat Greenies, and he and I are now sharing a bottle of topical medication along with a set of nail clippers and my pillow. It won’t be long before he starts wearing my clothes, and now that I typed that out loud I have to wonder if he is the one who misplaced my Barack O’Llama pajama pants. ‘ ‘ ‘text/javascript’>