The charity truck driver refused to take our couch and loveseat this morning because he claimed that they were too worn. As a result, we have turned our garage into a man cave and/or free furniture outlet. (The guy down the street has two couches and a flat screen television hanging in his garage. If you drive by his house when a game is on, his garage door will be open and he’ll be lounging on the couches with several of his friends. Not a bad scene, really. I believe he also has a neon beer sign.) ((Clarification: The couches aren’t hanging. Just the television.))

After the truck drove away, the four of us went to a movie theater to see Zootopia. It had already sold out.

“Today is a real pisser,” I said, before remembering that I’m trying to not talk like that anymore.

We traveled to a nearby cookie bakery and drowned our sorrows before walking to a popcorn shop that also sells wine and weird gift items. Do you know how sometimes around Christmas different stores have personalized Christmas ornaments and you just spin the display around until you find your name and its associated ornament (if you’re interested in that sort of thing, which I normally am not)? Well, this particular store had a personalized display for big pocket knives. Every single name on the spinning rack was a boy name. The only knives associated with women were “#1 Grandma” and “#1 Mom”. In other words, if you’re a girl who wants a knife at that store, you have to have a baby or a baby who has a baby.

Even Jesus had a personalized knife on the rack. Also, Boss Man.

I didn’t want a knife, but if I *did* I would probably have to go with Hank. Or maybe Dick. (My sister gave me a Dick coffee cup when I was in college and it was one of my very favorite things because I thought it was so So SO funny.)

The highlight of the afternoon was going to Elements Herbology where I purchased some Bumble Power Tea Additive. 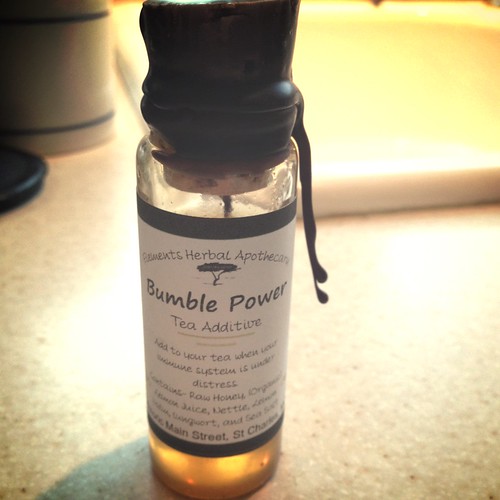 I’m hoping it carries me through the allergy season.

I always feel a little anxious on Good Friday. ‘ ‘ ‘text/javascript’>

3 thoughts on “I’ve got the power of bumble.”