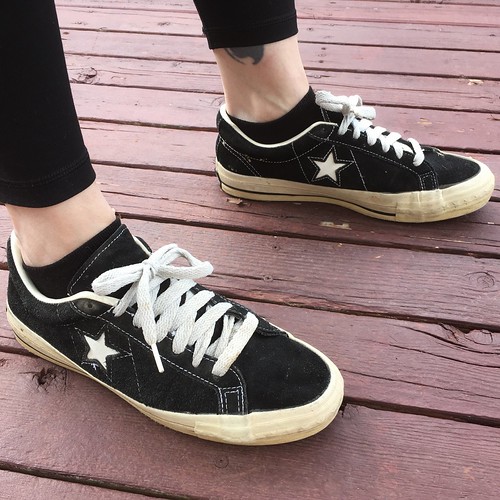 My dad turned 74 today, which means he might currently be on his fourth pair of Converse One Stars. (He doesn’t wear One Stars.) He still makes the best peach pies. He still comes to the rescue when garage door openers look broken. (He still comes to the rescue when his 46-year-old daughter looks broken.) He donates most of the food from his garden. He’ll gas up your car when you’re not looking. I could go on (and on).

This says it all: I was supposed to have jury duty on November 1. When I called in on October 31, I was told that I wasn’t needed. When my dad heard how disappointed I was, he ordered a copy of Twelve Angry Men for me and had it delivered with an assignment. I was to watch the movie and then call to tell him which juror I would have been. (I wanted to be Henry Fonda. Alas, I was Jack Klugman.)

Rest in peace, drinking age shoes. You were born in the same year as Justin Bieber, yet you are twice as smart and much more reliable.

Happy Birthday, Dad. You were born in the same year as Stephen Hawking and Joe Biden, and I’m willing to bet that neither of them can make a caramel pie. ‘ ‘ ‘text/javascript’>

13 thoughts on “Subtle innuendos follow. Must be something inside.”