At 9:00 this morning, Meredith and I camped out on the couch for the Macy’s Thanksgiving Day Parade. I was knitting on the cowl, she was working on her laptop, and the parade was acting as our background music.

One of the first performances was from the cast of Holiday Inn.

Me: I’m not sure why, but this sort of thing always makes me feel slightly uncomfortable.
Meredith: I hate this. I would rather watch the Muppets singing for 45 minutes.
Me: Yes. Maybe.

Pretty soon I was all wrapped up in my knitting and she was no longer looking up from her laptop to see who was on the parade.

Someone singing on the television: Are you blind when you’re born? Can you see in the dark?
Meredith: That’s not funny, because I WAS. And now I’m offended.

At first I didn’t realize that Meredith was talking to the cast of Cats, but when I did? I laughed and laughed because she WAS nearly blind in her left eye when she was born, and her right eye was severely far-sighted. (More on that here.) And then I felt bummed out because I still harbor guilt about being the mom who didn’t realize that her kid couldn’t see.

Shortly after Meredith forgave the cats, Jeff returned home from his 5K (where he finished second in his age group), and Harper got out of bed to join us downstairs. We cleaned the house, a few of us showered, I threw together a green bean casserole, and ten people showed up for Thanksgiving dinner (which was really Thanksgiving lunch but I guess dinner sounds fancier). (We WERE burning candles. The kind of candles that crackle and pop!)

At 1:00, everyone filled themselves with one or more of the following items: green bean casserole and cranberry salad and regular salad and mashed sweet potatoes and mashed regular potatoes and bread and stuffing and parts of a dead bird. Afterwards, some of us watched a dog show while others chatted and someone cleaned and then three of us went to the gas station down the street for cash and ice cream and two people went upstairs and suddenly it was time for pie. Pumpkin and apple. Both delicious. Shortly after pie, Scout and Henry came back into the house and I removed the shock collar from Henry’s neck.

And then I put the shock collar around MY neck because what’s good for the goose is good for the gander, and the best way to live your life is to choose the experience that will have the most anecdotal value. 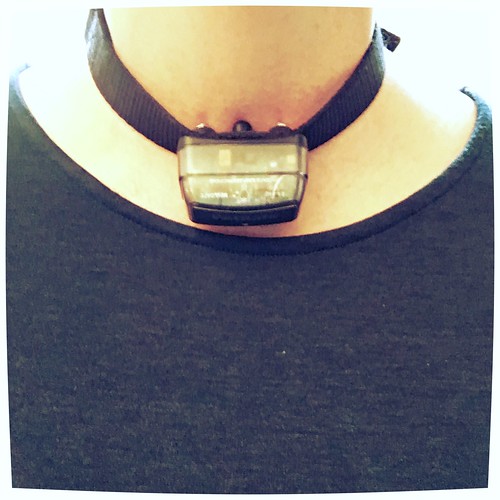 The shock collar has a tiny red light on the top that lights up when a shock is administered. Henry has learned that when the shock collar is on, it’s best to not bark. I, however, haven’t learned a thing.

(Notice the red light after my third bark. That bark delivered a shock.)

I barked and shocked myself five times before admitting that it was more than I could take. And then I realized that I no longer remember how to drive a car. (In China, electroshock therapy is used to cure people who suffer from internet addiction. In other words? SO LONG, NABLOPOMO! I’ll see you on the 12th. OF NEVER!!!)

5 thoughts on “Can you say of your bite that it’s worse than your bark? (Jellicles would and jellicles can.)”