This morning after dropping Harper off for her ACT, I killed an hour at one of my favorite coffee dumps. (For the curious: I had hot Earl Grey and a copy of Sing, Unburied, Sing.) The couple seated behind me talked about one of the most recent school shootings. The man in the comfy chair next to me drank from his coffee mug, ate a bite of peanut butter cookie, and then stood up and walked to the piano where he played a middle C. He would then return to the chair, sit down, and repeat the process. When he first started this routine, I was sort of annoyed. It didn’t take long before I was totally fine with the drink/eat/C, and annoyed with the people who looked annoyed with the drink/eat/C. Hell, if you have to drink/eat/C to feel level, I say drink/eat/C. Personally, I knit/nap/stare at my shoes. We all have our stuff.

Speaking of school shootings and how I’m not very good at segues, Meredith’s history teacher was shot on a trail near the high school a few weeks back. The bullet traveled into him and out of him, yet he somehow managed to keep moving so he could flag down a car and get a lift back to the high school. He was worried the shooter (who was caught the next day) was headed toward the school, so he wanted to save the kids because he’s a freaking hero with a Beastie Boys poster on his wall. (I made a mental note to like him at Curriculum Night all because of a Beastie Boys poster. I should perform the entire Licensed to Ill album for you sometime, but I probably won’t because I’m 47 and I should be knitting or napping or staring at my shoes.) The teacher was released from the hospital on the evening of the shooting and is currently recovering at home.

All of this to say: We’re all just a trail walk (where “trail walk” is probably a metaphor) away from something that creates a Before and an After. I’m sure the teacher will now refer to events in terms of “Before I Was Shot” and “After I Was Shot.” I have a few before/after events: College, Marriage, Kids. I’ve been spending a lot of time thinking about my friends and family and their Befores and Afters.

Speaking of college and how that segue thing doesn’t seem to be improving, after the adventure at the coffee dump, I drove myself over to a craft show to wander around and do the whole “I could make that!” thing. As I stood rifling (no gun pun intended because Dear God with the guns already) around in a bucket of mittens, the mitten lady mentioned that she had only one pair of Mizzou mittens. The woman next to me said, “Oh. I’m not a fan of Mizzou.”

Me (clearly joking): WHAT?!

Woman Next to Me (WNtM): Mizzou is a party school.

Me (defending my beloved (?) university): It doesn’t HAVE to be.

WNtM: I suppose you could get an education there. A SEX EDUCATION.

She laughed and laughed until I grabbed her coat hood, lifted her up, and swung her three times above my head before flinging her into the side of the kettle corn truck while screaming, “MY MIZZOU-EARNED MASTER’S DEGREE IN PSYCHOLOGY IS TELLING ME THAT YOU SMELL LIKE NARCISSISTIC PERSONALITY DISORDER!”

(My master’s degree is actually a bachelor’s degree with an inflated sense of self-worth. Also, I did my fair share of party-as-a-verb while at Mizzou, but I also learned music theory and how I didn’t want to be an elementary school teacher.)

Speaking of Beyoncé, I made a shirt. 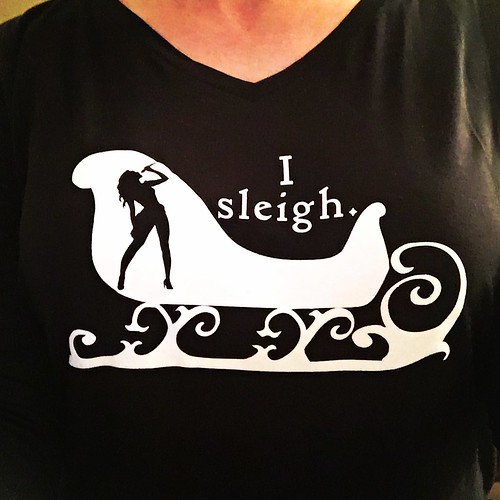