I know I’m sort of a bad American. I’m not sure I’ve EVER been a GOOD American, really. I mean, I’ve done the research and voted in every single presidential election since 1988, but I don’t sing the National Anthem just like I don’t sing the theme song from Happy Days. (I will and do sing Air Supply songs. Air Supply. Australian?) I didn’t call the police when someone left a bag of dog poop in our front yard, but I DID call the police when someone stabbed John Green. I feed my dogs fish-based food because of Henry’s allergies, but I don’t personally eat fish. (Or chicken or cow or kangaroo. (Remind me to tell you the story of the kangaroo.) No buffalo. No on goat and lamb. I’m all over cauliflower.) I think I just veered into the wrong lane.

I’m not a fan of the man who was elected president, but I’m also not really a fan of fast food pasta. I’ve eaten goopy nachos at baseball games, but I prefer to eat the Lebanese nachos by the tattoo shop in the city. When someone says “God bless the USA” I tend to end it in my head with “…but not JUST the USA.” When I watch figure skating during the Olympics, I cheer for the people whose outfits I like the most—even if they need a translator to get through an interview with Lester Holt.

When I hear people saying the pledge of allegiance, I try not to roll my eyes at the part about “indivisible with liberty and justice for all.” (I know. Read the first sentence of the first paragraph. I’m not keeping any secrets over here.)

Tempe mentioned that she would like to write out the Constitution by hand, and I think that’s such a fine idea because What a Great Way to Visit It Again.

Meredith wore this shirt to school last week, and some guy called her on it and then spent the entire class period making snide remarks to his friends. 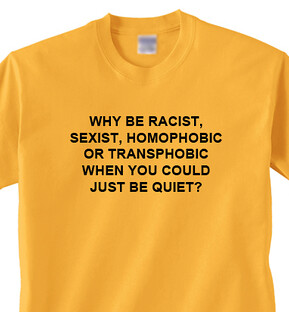 I made this shirt yesterday morning, and I know it’s not designed well and I also know a shirt doesn’t really change the fact that sometimes kids go to school worrying about a math test when they should probably be worried about being shot in the face. 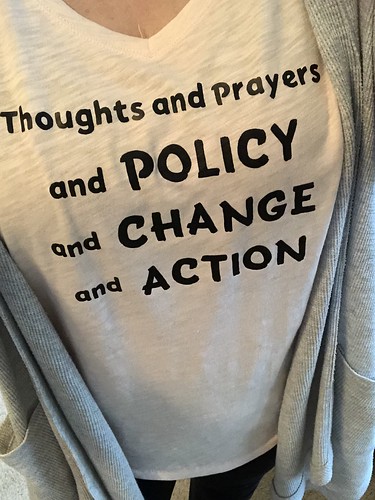 I’m reading three books right now, and tomorrow I’m going to return them all (unfinished) to the library and pick up Lincoln in the Bardo in hardback and CD. I’m not reading/listening to it because of the American president reference. I’m reading/listening to it because it has ghosts and David Sedaris is one of the narrators and he’s no Ari Fliakos, but I still love him. ‘ ‘ ‘text/javascript’>

15 thoughts on “When I hear about a random pig sighting, I have no idea how to feel.”