One year ago today I sat in a chair and paid a guy to draw a fountain pen nib, a stippled spiral, and suspension points on my left arm. 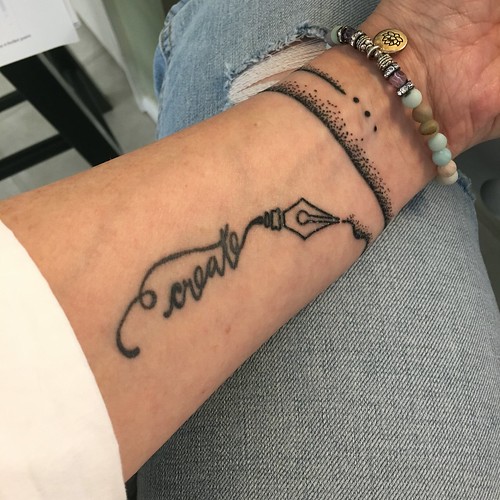 The stippling was his idea, and what a good idea it was. 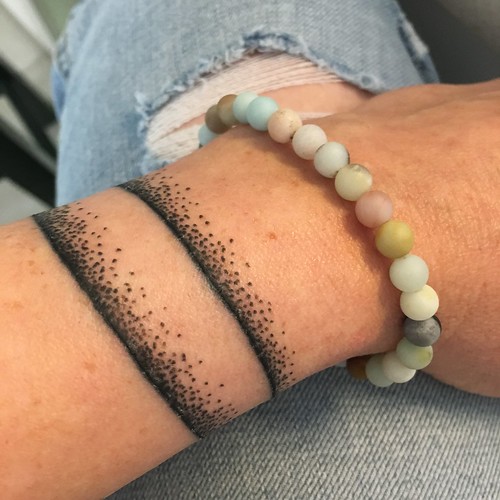 Stick with me here for a second.

I experience (what I believe is) more than the standard amount of extreme coincidences. Here are three examples:

1. Harper (who was named for Harper Lee) was born on Harper Lee’s birthday. We didn’t find this out until she was a few weeks old.

2. About five years ago, I ran into my best friend from college after not seeing/talking to each other for a dozen years. We quickly discovered that our dogs look like cousins and are both named Henry, we had the same primary care physician, we had purchased the same set of earrings from Kohl’s, and so many other things that on their own would not be seen as extreme coincidences but when you spend evenings saying “Me too!” over and over again, something magical is happening.

3. More than once each week a streetlight will go out as I’m driving. This has been happening since my grandpa died many years ago. It happens at different times of the day and has happened in several different towns. A few weeks back I put on my armadillo necklace (Grandpa loved armadillos) and went to my mammogram. When I sat down to register for the test, the receptionist’s table lamp went out and she said something like, “Well, THAT’S never happened before!” (Me (in my head): Actually, it happens all the time.)

A book I recently read refers to these things as Practical Magic. Back in 2015 I watched an interview with Bono. During the interview he told a story about his mother, and while telling the story he said, “I am ALWAYS looking for cosmic rhymes.” Cosmic rhymes. I love that. It gave me a term other than Divine Intervention to use for those weird experiences that deserve so much more than “coincidence.” (Or “irony.” Don’t even get me started on the misuse of that word.)

Yesterday I sat in a chair and paid the same guy to draw a cross, a stippled spiral, and cascading stars on my right arm. 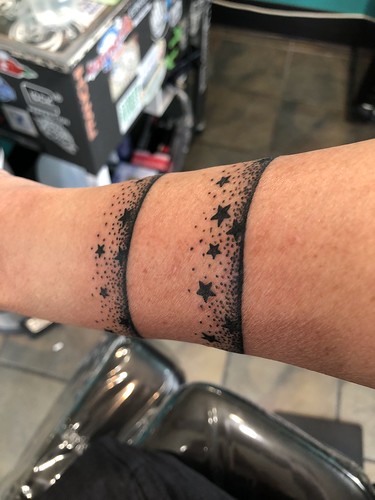 The fact that I did it NOT knowing that today was the one year anniversary of the other stippled spiral is a TINY bit of cosmic poetry in itself. (Probably more of a coincidence, actually, but definitely noteworthy. Not ironic at all.) 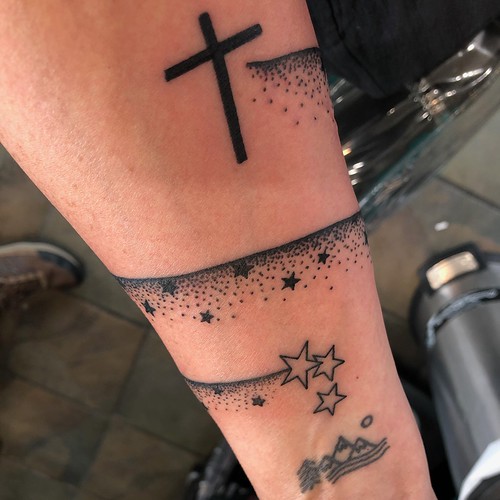 My alarm went off at 3:50 this morning, and the cats and I came downstairs where we drank coffee and watched the wedding. And it was pretty and people had beards and my most important takeaway? I now know who Bishop Michael Curry is, and high fives to him over and over again. ‘ ‘ ‘text/javascript’>