This morning I made plans to meet a friend for coffee after dropping the girls off at their Music, Art, and Drama camp. Because the girls and I arrived at camp early, I also arrived early to the coffee place where I was super excited to find outside seating. (I typically don’t do outside. BUT, with temperatures hovering in the low 70s, it felt like a fine idea.)

I ran inside (figuratively, obviously), grabbed an almond milk latte (my current favorite because: No Dairy), and then returned outside to choose a seat.

I went with this one. 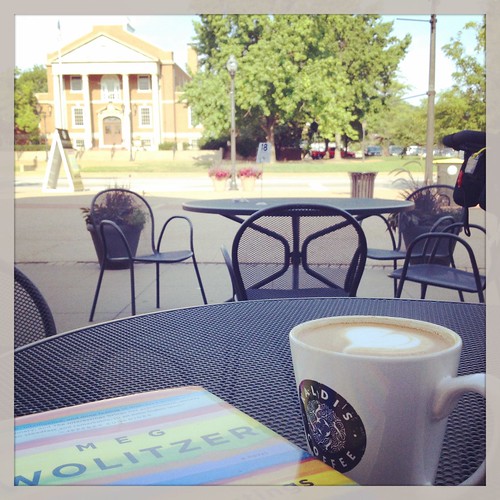 Shortly after I sat down, a man with one leg sat at the table next to mine. I do feel weird referring to him as a man with one leg, but I didn’t hear him speak or see what he was eating, and he was with a friend so there was no real wiggle room for a casual Good Morning. (He sat facing my back, as most people tend to do (You other brothers can’t deny.), so it wasn’t long before he transformed into Fellow Outside Sitter.) I know that every person is so much more than a tag like Crazy Underpants Lady or Tattooed Neck Guy. Please know that I know that. (I’m sure I’ve been referred to as Old Bald Mom or Bad Eye Contact Weirdo Who Always Cancels on Plans. It’s fine.)

Anyway, one thing I love about this particular coffee place is the fact that the outside seating area is filled with polite little birds. Some people feed them. Some don’t. The birds will come up and look at you, and if you don’t toss a bagel crumb in their direction, they’ll scamper off to another table. (Sometimes birds scamper.) If you feed them? They’ll stay, until you STOP feeding them. Do I need to keep explaining this? I have a funny feeling that you already know how birds do. Birds have been behaving this way for YEARS.

One particular little bird was little. (And because I used the word Little twice in that sentence, you’re probably gathering that he was abnormally small. You are correct.) He bounced up to my table and because he was fluffy and could use only one of his legs, I ALMOST ran (figuratively) back inside to buy him a piece of toast. (Luckily, another man two tables over had more than enough bread crumbs for the birds, and it didn’t take long for Fluffy Little Guy to catch on to where the crumbs were coming from, or from where the crumbs were coming (if prepositional rules are to be followed). However, because this tiny little bird had a flat tire, I kept my eye on him. Because THAT’S WHAT A MOTHER DOES.

At around 9:00, my friend arrived. (For the sake of this story, let’s call her Alison. We reconnected nearly 15 months ago, and you can read about that here if you’re kicking back just wanting to read stuff. It’s a good story.) We sat and talked about not eating flour and how she’s exercising and I’m NOT exercising and family stuff and old times and as we talked, my little friend the little fluffy bird stopped by.

Me: Oh! That’s my favorite little bird. He’s just so fluffy! He looks like a baby. I love him and his sad little leg.

Alison: Is he using his leg at all?

Me: No. I wonder if he was attacked by a cat.

Alison (looking closely at my tiny fluffy bird friend): DOES HE EVEN *HAVE* A LEG?!

With that, we heard the scraping of a chair behind us. It was Man With One Leg. He and his friend had packed up their stuff and were leaving.

Alison and I immediately did that thing called Crazy Big-Eyed Lady. 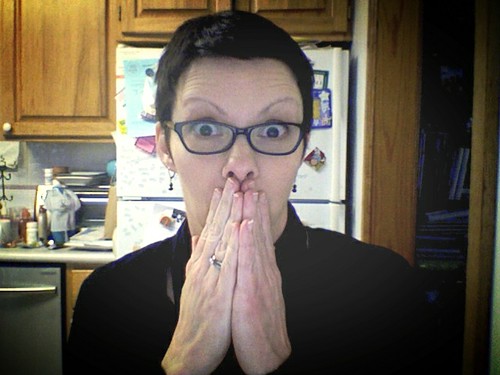 (That was the face I made a few years back during Meredith’s spelling bee finals. If you’re still in the mood to hang out with me, the story is here.)

I don’t think the man heard us. I really truly do not think he did. (Alison didn’t even REALIZE that Plaid Shirt Guy was the Man With One Leg until he got up to leave with his friend. See? Your Nutty Owl Dress Lady might be my Twinkling Biscotti Friend! The world is a magical place. So many different colors!)

After the feelings of mortification wore off, I started to giggle. (I giggle at funerals, too. It’s a nervous thing.) Pretty soon I was laugh-crying so hard that I had to run (literally this time) to the bathroom to wipe the (not so waterproof after all) mascara from my cheeks.

After composing ourselves, we walked down the road to the farmers market where I admired the heck out of a cobbler. (He was taking a break from mending shoes. HA HA HA! It was really a peach cobbler! I love words!)

Enjoy your weekend. You are, and always will be, my Amazing Internet Friends (even if you double as People Who Smell Like Goat Cheese). ‘ ‘ ‘text/javascript’>

12 thoughts on “Also, one man’s trash is another man’s treasure!”