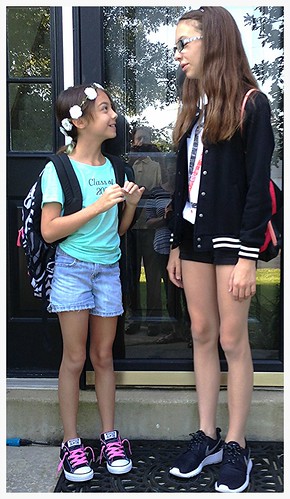 The girls are now in the fifth and seventh grades, meaning we’ve entered the final year of elementary school and also the Wednesday of middle school. Before leaving the house last Tuesday morning, Meredith said, “Well, I’m off to start the second half of my public education!” (She doesn’t count kindergarten, because although she loved it, she doesn’t feel like she learned anything new. “First grade is where the learning started to happen.”) Anyway, I look at the photo above and all I see are legs and potential. It’s going to be a good year.

I’ve walked into exactly 3,492 spider webs in the past week, Henry brought a screaming cicada into the house a few nights back, and yesterday I stepped into the car and noticed that an inch worm was on my leg and getting ready to crawl under my shorts. Enough is enough!

The pest guy arrived today at 11:00 because some living things should live inside and some should live outside. Although none of the creatures/detritus (are webs considered detritus?) I mentioned in the paragraph above are part of our pest scheme (no spiders were harmed, the cicada was returned to the yard, and the inch worm went from leg to index card to leaf on the driveway), our pest guy was interested in hearing about them, particularly the beast that stirred us to make this sign: 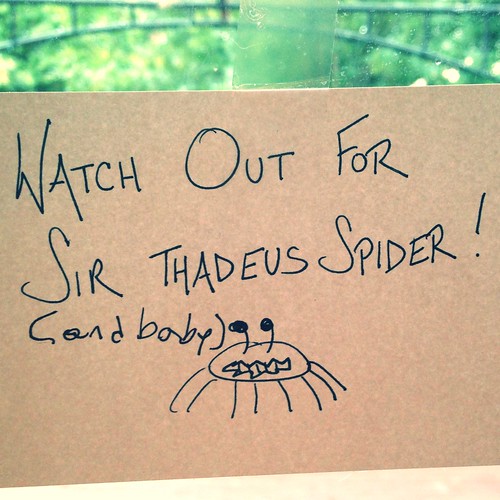 Sir Thadeus is a wolf spider who is the size of an actual wolf, and that’s about 2.7 feet shoulder to shoulder, in case you were wondering. I came within inches of walking into his web last week, and I’m still shuddering. Anyway, after I sang my spooky spider song to the pest guy, he cheered me up with his muggy weather song!

Pest Guy: The temperatures aren’t bad out there, but the humidity is terrible, especially since I’m Father Christmas!

Me: Are you serious?

Pest Guy: It’s the reason I’m growing out my beard. Publicity photos are in October, so I have to start growing my beard early. This humidity makes it really rough.

Me: I love that we’re having this conversation. I was raised in a church that has a live Nativity. All of the deacons grow their beards out at the end of the summer, so I totally get what you’re going through.

Pest Guy: I always enjoy giving Bob Cratchit some ribbing when I see him walking around on Main Street. If you see me this year, be sure to say hello!

Me: My best friend was a tiger in college!!!

(I always tend to take things one step too far.)

Our house is protected, I met Father Christmas, I have the worst cold I’ve had in decades, and I had a pinto bean burrito for dinner. Three of these items bust the heck out of the fourth, rendering sneezing and coughing completely unimportant.

Finally, our clematis is vining on the pergola: 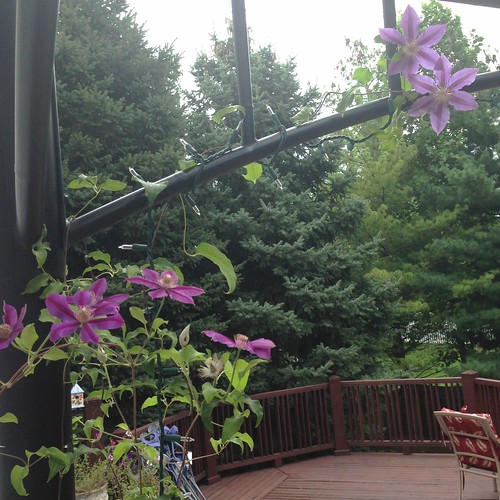 Also, I painted a gnome and the girls helped me name him.

I am thrilled to introduce you to Governor Narcissus P. Snickerdoodle. (His nickname, given by Meredith, is Garlic Naan.) 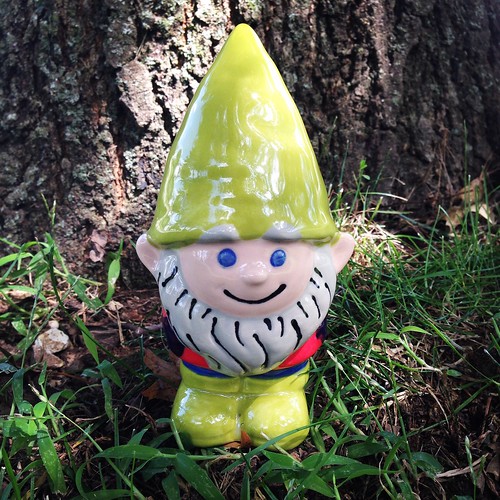 He honors Christmas in his heart and tries to keep it all the year. ‘ ‘ ‘text/javascript’>

9 thoughts on “We Spirits of Christmas do not live only one day of our year!”