When I started this website back in 2001, I never had any intention of keeping it going through 2015. BUT, I’m glad I did and I won’t be letting it die out anytime soon. (I know I had a few moody episodes (One with a death threat! Oh, 2006…) during which I sat back for a few months, but honestly, even when I left I (sort of) knew I would be back.) I love documenting the stuff and nonsense in which our family seems to roll. I love having a voice and using my voice and hearing your voices.

This morning at church, our pastor spoke of privilege. As a pastor, he is allowed to attend certain events and enter certain places that your average non-pastors aren’t allowed to attend and see. He realizes that these special opportunities are part of his privilege. He also spoke of the scribes “…who like to walk around in long robes, and to be greeted with respect in the marketplaces, and to have the best seats in the synagogues and places of honor at banquets” and how “They will receive the greater condemnation” (Mark 12:38-40).

I grabbed my notebook as soon as he said, “I know that with privilege comes responsibility.”

Jonathan Butler is a graduate student at the University of Missouri in Columbia. He is currently on Day 7 of a hunger strike and will continue to strike until the university’s president steps down. The president is being blamed for not addressing the escalation of racism on campus and for admitting that he was ‘not completely aware’ of systemic racism, sexism, and patriarchy on campus, despite being provided with countless examples. It is time for a new president at the University of Missouri in Columbia—one who does not simply sit back on his leather chair (in his long robe while seated in places of honor at banquets, etc.) hoping that racism goes away. A few days ago, I had never heard of Jonathan Butler, and today he is all I can think about. Jonathan Butler is stirring up change, and it makes me sad to know that his life could end. The world needs Jonathan Butler’s voice. (I want nothing more than to deliver a warm meal to Jonathan Butler right now. The only thing holding me back is the fact that I fully support him.)

My notes from this morning’s service will be on my mind for the next week and beyond. 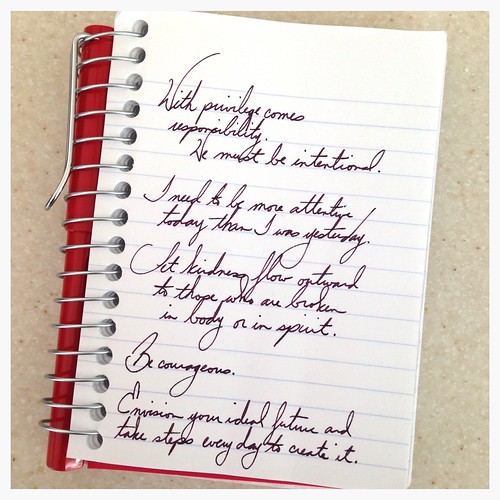 15 thoughts on “Let us all be rich in courage.”