Yesterday morning I went to the grocery store to load up on sweet potatoes and lunch supplies. (You needed to know.) Afterwards, I went to a different grocery store because Meredith prefers pear sauce to apple sauce and not all of the stores carry pear sauce. (The story just keeps getting better.) After that, I went to the pet store because our dogs have blasted through yet another 33 pound bag of food. (Because dogs eat.)

When I walk through the pet store, I always stop and talk to the adoptable cats for a few minutes because I like to whisper hopeful messages to living things who spend time in tiny cages. (I suppose that’s not exactly true. I’ve never visited a prison. With that said, I would like to put out some hopeful messages to Adnan Syed, but that’s a whole other bag of different colored horseworms.)

All four slots were filled with cats, and it broke my heart, as my heart is easily broken.

Me (to Toby): You’ve been here way too long. I just know you’re going to find a home soon. You’re so smart!

Me (to Gingersnap): You have an odd name for a boy cat, but the fact that I’m saying that says more about ME than it does about you! I hope you’re able to wake up in a house on Christmas morning. You’re so sweet!

Me (to Graham and Chip): Hey. Whoa. This might sound weird, but I think you are meant to be my sons. 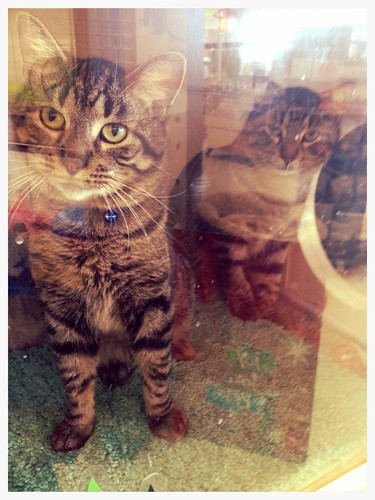 I put my hand close to their window and BOTH CATS REACHED THROUGH THE HOLES TO TOUCH ME.

I immediately texted my patient, kind, not envious, not boastful, not proud, et cetera husband. 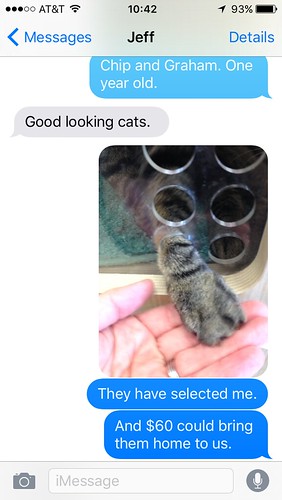 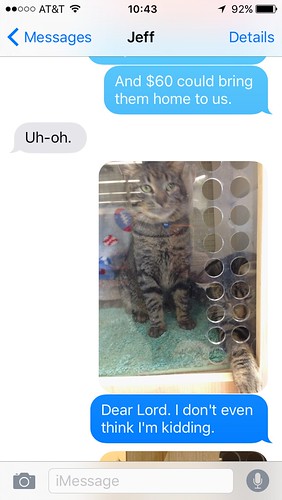 Yesterday afternoon I called the rescue agency and left a message to ask if Chip and Graham are cool with dogs.

At 8:30 last night as we drove home from the band concert, Meredith announced that she was craving a baguette from Panera. As we made our way into the Panera lot, I picked up a message from the woman at the rescue agency telling me that she was at the pet store and that I could call her back.

The pet store shares a parking lot with Panera, and some things are just meant to be.

We went to the pet store. We met the woman from the rescue agency and told her all about Sidney and Ramona and how we think they were poisoned by the formaldehyde in our new carpeting. We told her that Ramona had died a year ago, so we were starting to have the conversation about adopting another cat. We told her that we would keep Chip and Graham together. She opened the door to their cage so we could interact with them. Meredith fell in love with Graham. Harper fell in love with Chip. (We found out that Toby was adopted yesterday!)

In other words, Chip and Graham are homeless kids who persevered and went on to college.

This morning I filled out the forms so that we can foster them before finalizing an adoption, and I’m going to pitch this entire story to the Hallmark Channel because they haven’t released anything decent since A Cookie Cutter Christmas. ‘ ‘ ‘text/javascript’>

25 thoughts on “Their full names are Graham Cracker and Chocolate Chip Cookie.”