Christmas. I’m never quite ready for it (I still haven’t finished shopping. Oh, what’s that? Christmas is over, you say? NOT IN MY WORLD!), yet it always happens and it’s always just fine.

Even when one of the dogs is emptying his stomach all over the floor? Just fine. (Picking up the pile was not pleasant, especially when I reached the clump that I thought was a bird. But, you know what? It wasn’t a bird, and within 12 hours Henry was mostly back to normal.) 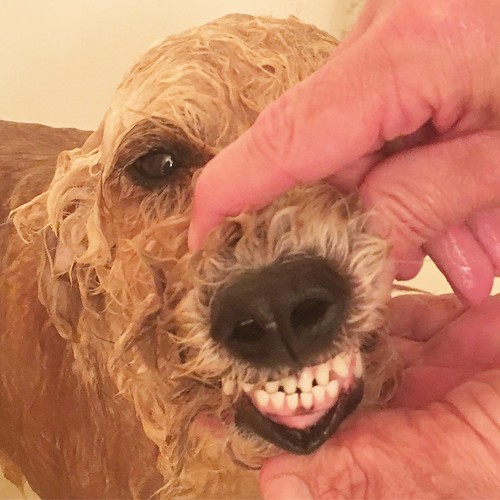 I’ve messed up quite a bit over the past few days. I tried to make a Texas sheet cake in a regular cake pan and then halfway through baking time it occurred to me that it’s called a sheet cake because it’s supposed to be made on a sheet. SO, Jeff and I spatula’d (spatulaed? what is happening right now?) the half-baked (we’ve all been there) cake onto a sheet and smashed it down and fast forward 30 minutes to when Jeff called it a Texas Bullsheet Cake. The name stuck, and the “cake” was surprisingly delicious. 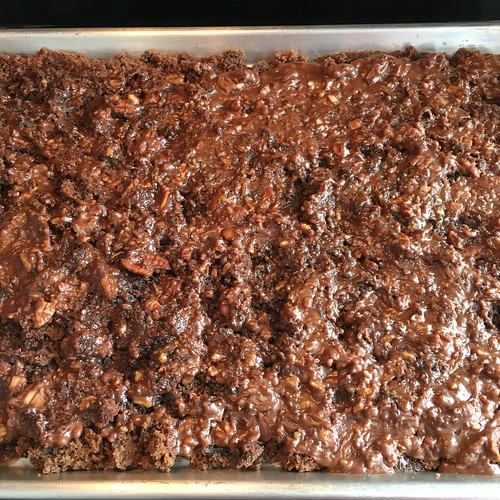 Several gifts for the girls haven’t yet arrived because I ordered them too late. (A few haven’t even shipped because I *really* ordered them too late.) I’ve misplaced a gift that I purchased for Harper. (It’s a bath bomb called The F Bomb, and maybe it’s all for the best.) Earlier this week I was going to visit with a friend at around 800 in the morning and do you know what time I woke up? 829. I’ve been making crappy food choices and sleeping too much and hugging on the dogs when I should be wiping down the counters. Ah, but the fan continues to spin and as soon as the temperatures rise above freezing, I’ll be installing outdoor lighting in front of the house. (To me, outdoor lighting is EVERYTHING, which I originally typed as EVERYTHONG.)

Let’s see. What else? I learned how to use the buttflap of a onesie because desperate times call for desperate measures and our main floor bathroom doesn’t have a vent so it’s COLD in there! I’ve been practicing my eyebrow application and it doesn’t seem to be going very well, so I have decided to distract the viewer with glittery face powder and an armadillo necklace that hangs right at the line of cleavage. (I have no clothing that displays any sort of cleavage. Sorry, armadillo.) ((Why an armadillo? Because of my grandpa. That’s why.))

Evidence of the onesie along with a mantel gnome and a facial expression of buttflap-conquering pride: 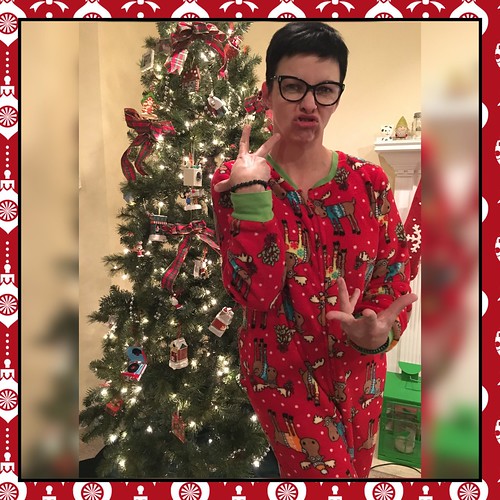 And another thing: A friend sent this to me and I love it so much because I believe I could be the happiest resident of Doreenia. 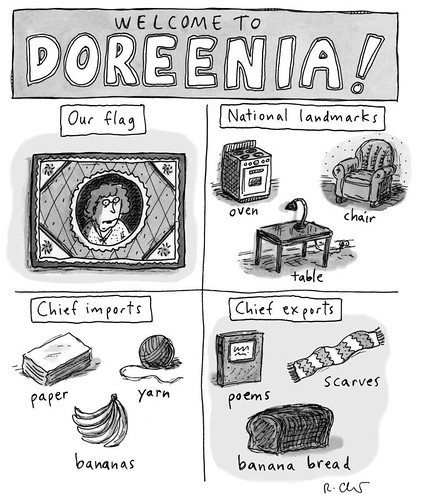 Last night a friend asked if I was going to do the new 30 Days of Yoga with Adriene that starts on January 1. I have been so far removed from yoga that I didn’t even realize a new program was starting. BUT, I just signed up. Care to join? ‘ ‘ ‘text/javascript’>