The reunion started at 700 on Saturday evening. When I pulled into the lot (more than slightly late), my little sidekick who I like to call Immobilizing Anxiety begged me to stay in the car “for just one more song.” So I did. And then I did again. BUT because I’m the luckiest person I know, I was soon able to get in touch with three friends who were up for kicking off the night at a bar two buildings down.

Less than five minutes later, I was sitting behind a few of these. (Not all were for me. Don’t make assumptions, Sporty.) 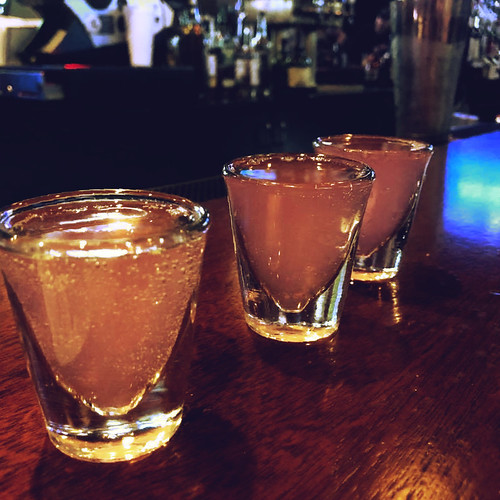 Less than ten minutes after that, we were reunion bound once again. 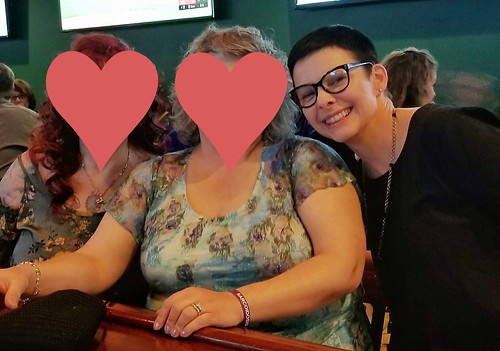 (“Just what the doctor ordered!” said someone who uses the idioms that I’m trying to avoid like rattlesnakes.)

Reunion Observations:
1. Although everyone in the room is staring into the mouth of a half century on Earth, every single person looked amazing and happy and energetic and the vibe made me want to hug more than five people SO I DID.

3. I didn’t recognize probably one out of every fifteen people there. They could have been spouses or crashers or people named “Steven Enigma from your sixth hour study hall!” I have no idea, but I’m glad they were there.

4. More than one person is retired. Like, retired retired. Not yet eligible for AARP, yet playing golf and (perhaps) listening to Herb Alpert & The Tijuana Brass. (Isn’t that what retired people do? It’s definitely what I will do.)

5. Several people mentioned that they love their job, which is so refreshingly unusual. (I really should create some Venn diagrams to summarize what I learned about specific people and humanity in general, but why would I do that when I should be packing for Ohio?)

6. I do regret being a bit of an outsider during my high school years. (Much more of a Ponyboy than a Cherry, really.) Is there an expiration date on regret? I really don’t have many.

7. I had a wonderful conversation with someone I used to see throughout the week and again on Sundays, and he shared a memory with me that involved television and sex, which sounds so much dirtier than it was. I didn’t remember anything about the story he told, but I spent time yesterday opening some of the file cabinets in my head, and there it was. (By establishing space for this event in my head, I probably forgot how to slice a banana without touching it. Only time will tell.)

8. This isn’t really an observation, but I think I need to tell you that I didn’t go with the original outfit I had chosen. Instead, I went with my favorite look, which I like to call Asian-Inspired Vintage-Necklace-Wearing Badass. (I’ve never really called it that, except for right now. It probably won’t stick.) The outfit is actually fairly mundane, so I’ve decided to show it to you along with the very NOT mundane veggie breakfast tacos I ate in Denver a few years back. 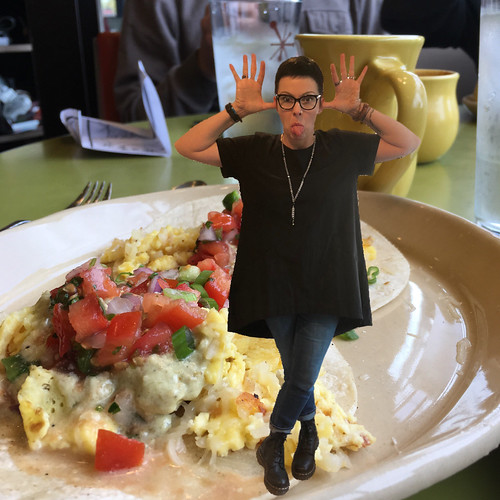 Shredded potatoes with eggs and cheese and that tomato stuff I love but can’t remember the name of right now and it’s all thrown onto mini tortillas?! Also, black linen tunic with jeans, Doc Martens, a leather tape measure bracelet because you never know, and a necklace my mom used to wear to parties in the 70s?! Yes. And yes.

9. My last move of the night was handing someone a fork filled with blue cake icing. (Do you fill a fork? Can you fill something that has tines? Tines, right? God, this would be so much easier if there had been spoons on that table.)

10. I was embarrassed by my own behavior only two or three times during the 150 minutes I spent with my former classmates and the Steven Enigmas. Nerves tend to make me either sheepish or floopy. Saturday was floopy, which means no time was spent taking deep breaths in a corner while chewing on my elbows. (I’m exaggerating. No one can chew on their own elbows. Except for maybe you.) ‘ ‘ ‘text/javascript’>

11 thoughts on “30th Reunion Notes: The “I met a strange lady, she made me nervous. She took me in and gave me breakfast tacos.” Party Mix”