We moved Meredith into an apartment that she will be sharing with three of her best friends, and because I like to spend money on silly things*, I purchased a beaded bracelet and a labradorite ring before making the drive home. 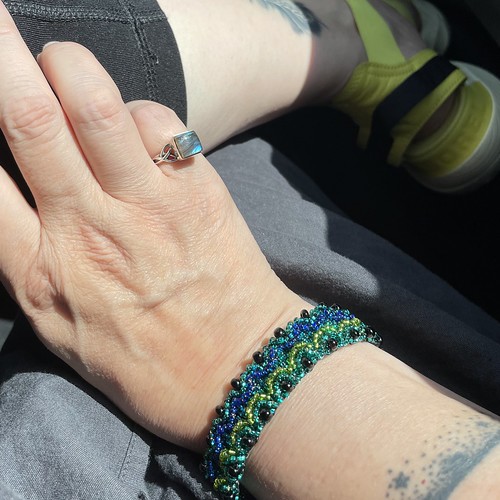 According to those who believe, this labradorite ring will help reduce anxiety, strengthen my immune system, and boost metabolism. Specifically, it will aid in the burning of fats and carbs, making it good for weight loss**, but that’s not why I bought it. I bought it because I like blue squares.

I am beguiled by beautifully beaded baubles, so I was behooved to buy the bracelet.*** It holds 2,747 tiny beads, and I know this because I counted them, and for every bead I counted I said a tiny prayer for each of the people in my life whom I have scorned or disappointed, for there is no shortage.****
__________________

*We currently have something like 27 flies in the house, and although this has nothing to do with my inclination to spend money on silly things, it’s something that is driving me bonkers right now. Because I tend to sit by a window, the flies fly full-speed into my head as they try to make their way back outside. I am very cranky, but grateful that I don’t bruise easily.

**I joined Noom. And it probably works, but only if you actually follow the program, which I do not. My relationship with food is complicated, and I’ll never judge anyone for anything having to do with food or weight because everything is so fucked up and all I can do is try to address what my brain holds while being quietly envious of brains that aren’t like mine. Fuckin’ Noom, man. Fuckin’ me.

***I’m not a huge alliteration fan, but I would like to lead you toward an alliterative phrase that has stuck with me for over 20 years. The essay titled “On Talking to Oneself” by William Gass holds the sentence “A thought is peeled and placed upon a plate.” Say it out loud. It’s a tongue flip followed by lips clapping in 5/4 time! (And please read the essay, because it’s wonderful. I think it’s wonderful.)

****I’m lying to you. I didn’t count the beads, nor did I bead-pray for the masses who have suffered because of me. (I have scorned or disappointed exactly 141 people, and that’s a beaded ring at best.)

3 thoughts on “I have everything under control.”