About a week after Christmas, American Eagle sent an e-mail that said something like, “You just scored a free pair of jeans.” I immediately deleted the e-mail, because that’s what I do to crap liar messages. Early last week I received another e-mail from them that grabbed me by the shoulders and yelled, “Hey! Your free jeans thing is about to expire!”

I decided to call their bluff.

I went over to the website and spent around four minutes browsing through the jeans. I decided to go with the 90s Boyfriend Jeans, because I’m a bit of a dope for the music I listened to in the 90s and the clothes I wore in the 90s and a lot of the experiences I had in the 90s. I then decided to NOT go with the size I currently wear, but the size I WANT to wear. (We all have our problems, don’t we?) I put the jeans in my cart, and I was surprised to NOT receive any sort of pop-up saying “Nice work! You’re only $250 away from your free jeans!”

Over to the check-out info. I signed in and entered my address and flipped it over to the payment info where I kept waiting for the ball to drop, but it didn’t drop. This paragraph is boring, the jeans were free, and the shipping cost was $0.01.

Three days later the free jeans arrived. They did not fit, which is exactly what I expected. When I tried them on and buttoned the BUTTON FLY, my spaghetti octopus of intestines had nowhere to go, so it sucked itself INTO itself (imagine that!) and suddenly my rectum popped out of my left ear.

A few days later, I tried the jeans on right after I got out of bed (when my intestines are the least convoluted), and that’s when I took this photo. 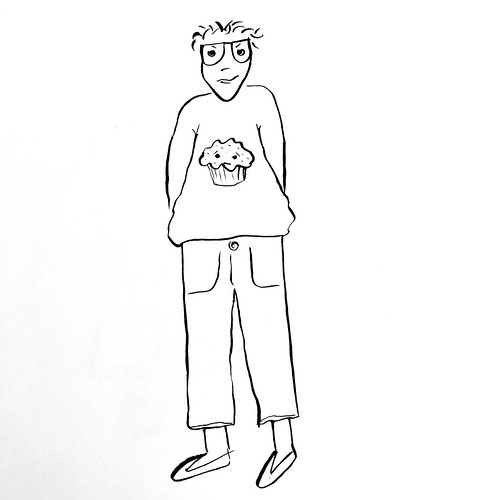 My goal is to wear the jeans comfortably (with my rectum right where it needs to be) on my 50th birthday. I have 104 days to get my shit together. Figuratively. (Also, maybe literally.)

8 thoughts on “Are free jeans ever really free?”